In alignment with the State of California, which has removed mask and vaccine requirements for indoor events, Coronado Playhouse will not require patrons to provide proof of vaccination or to wear masks while attending shows or events. However, we strongly recommend mask-wearing while at the Playhouse.

If you are feeling sick or are exhibiting any COVID-19-like symptoms, or if you have been exposed to COVID-19, we recommend you stay home and contact our box office to reschedule your tickets. They can be reached at (619) 435-4856 or boxoffice@coronadoplayhouse.com

This policy is subject to change if new public health guidance is received from federal, state, or local authorities.

Coronado Playhouse is sending a love letter to our patrons in the form of a very special cabaret: A Diamond Cabaret: Celebrating 75 Years.

The nearly two dozen songs include solos, duets and group numbers sung by 24 performers, including many familliar  faces. This diverse group will help the Playhouse express our gratitude to our patrons for their support and will highlight popular productions from our 76-year history.

Join us as we revisit our past and musically explore what made Coronado Playhouse one of the longest running arts organizations in San Diego County. Existing audiences know that CPH cabarets are favorites among our patrons. This feel-good show will sell out during this one weekend run.

Add-on to your order!

Help us raise money for the Playhouse! 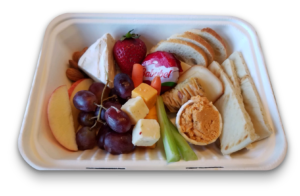 Add a delicious cheese and fruit pairing for only $20.

Add a cheese and fruit plate AND a bottle of champagne or wine for only $45.

Perfect for two to three people! White wine, red wine or champagne is available. Ask about our current selection at our fully-stocked snack bar.

Order online once you select your seats.

Commemorative tote bags are also for sale at the cabaret!

Sue Boland  began her professional career in 1975 and has performed in or stage-managed over 100 productions, twelve of which were here at Coronado Playhouse, in the Quonset Hut, the Tent on the Bay and our forever home, the Rec Center. My first was in 1993 as the maid in Guest in the House and my last was in 2019 as Fraulein Schneider in Cabaret. I am honored to share one of my favorite roles with you tonight.

Daryl Daley is happy to be back on the Coronado Playhouse stage! She was last seen in The Old Man and the Old Moon during the 2019 season. This marks Daryl’s 14th production at CPH; favorite roles include Mary Sunshine in Chicago (2013), Beauty in Sleeping Beauty or the Famous Rose Taboo (2014), Girl Bear in Avenue Q (2015) and ensemble roles in The Drowsy Chaperone (2011) and Spamalot (2014).

Thomas Fitzpatrick is excited to be back at Coronado Playhouse celebrating 75 years! Tom most recently performed at CPH in Mamma Mia!, The Man of No Importance, The Addams Family, and Fly By Night. He has also performed at Diversionary, Avo Playhouse, The Broadway, and San Diego Lyric Opera, among others. Tom has performed and directed at CPH, Pickwick Players, OnStage and Lamplighters.

Dianne Gray After a 25 year performance absence from theatre, Dianne was happily cast in Cinderella 2010. She played the role of Little Mary in her first San Diego production in 1978, so she is thrilled to sing again from Little Mary Sunshine, Coronado Playhouse’s first full-scale musical in 1965.

Jennie Gray Connard has been involved in theatre in San Diego for many years.  She has performed, directed, choreographed, produced and most recently was the Co-owner/Artistic Director of OB Playhouse & Theatre Company. Jennie is thrilled to be back at CPH to honor and celebrate its esteemed place in our theatre community.

Cassiopeia Guthrie (she/her) is delighted to return to Coronado for this special celebration! Selected credits include Guys and Dolls (Coronado), I Love You, You’re Perfect, Now Change, Little Women, Beau Jest, Rent (Patio), and Company (Lamplighters). Much love and thanks to ever-supportive family, friends, and the production team! @cassiopeiaguthrie

William Henry has performed in shows throughout San Diego, including with Coronado Playhouse, OnStage Playhouse, Lamplighters, Bodhi Tree Concerts, San Diego Symphony with the San Diego Master Chorale, Starlight Theatre, Lyric Opera, La Jolla Playhouse, and San Diego Opera. He enjoys gardening in his free time, as well as brutally punishing himself doing CrossFit workouts. Most of all, he’s enjoying his time performing alongside his friends in this production.

Barron Henzel has worked at Coronado Playhouse since 2001. His first role was playing Jim in Pump Boys and Dinettes. Since then, he has held uncountable positions on stage and behind the scenes. He has been on the board of directors since 2010. He was elected board president in 2012 and served in that capacity for eight years. He now serves as president emeritus.

Steven Jensen first appeared at CPH in Cinderella in 2010. Plays here since then include: Spamalot, Little Shop of Horrors, The Drowsy Chaperone, Guys and Dolls, Mamma Mia!, The Importance of Being Earnest, Sugar, 42nd Street, Hamlet, Romeo and Juliet, Much Ado About Nothing, The Winter’s Tale, Tartuffe, and others.

Tiffany Loui-Baumann is thrilled to celebrating CPH with dear friends.  Previous CPH: Godspell in Concert (2016), Avenue Q (2015), 42nd Street (2012), The Drowsy Chaperone (2011), The Wild Party (2010), and Sweet Charity (2008). Two years ago, Tiffany embarked on a different type of production, becoming a mom to her son, Reylan.  She and her husband Brian are excited to be adding an additional company member to this production in February.

Patrick Mayuyu is a native San Diegan. An actor, singer and choreographer, he’s performed on many local stages, national television and most recently on film in the dark comedy We All Die Alone, currently touring the festival circuit. Patrick is thankful for all the friends he’s made here at Coronado Playhouse.

Joel Miller began acting in San Diego on the CPH stage in Avenue Q in 2015, and since has appeared in shows across San Diego, including ion theatre, Roustabouts Theatre Co., and New Village Arts. His favorite role was appearing as the UPS Guy in Legally Blonde: The Musical.

Dave Rivas is honored to be part of CPH 75th and to be on stage with this incredible, who’s who of talent. CPH shows include, California Suite, Lend Me a Tenor, The Taming of the Shrew, The Importance of Being Earnest and Guys and Dolls. Visit Dave at www.daveyboyprodctions.com

Alisa Williams has worked with numerous community theaters around San Diego, both as an actress and choreographer. She has choreographed five shows for Coronado Playhouse, her last being James and the Giant Peach, and appeared here in Sleeping Beauty. Love to J and B!

Cameron Williams appeared on the Coronado stage in Sleeping Beauty and in Spamalot as Sir Lancelot, French Taunter, Knight Who Says Ni, and Tim the Enchanter. He spent ten years as Artistic Director for Pickwick Players, a theatre with a focus on involving youth and adults together on stage.

Jim Williams has been appearing on San Diego stages since 1981, his first show with Coronado Playhouse as The Man in the Chair in The Drowsy Chaperone, then Patsy in Spamalot. He is thrilled to be on stage with his three adult children and two daughters-in-law, all Coronado Playhouse veterans.

Michael Williams is grateful to be joining family and friends once again on the Coronado Playhouse stage. Many thanks to all of you for making this weekend possible.

Adriana Zuniga-Williams has photographed many Coronado Playhouse productions over the years. She also performed in the 2014 Oz cabaret, Journey through Oz. Her last role was Mary in Jesus Christ Superstar at Patio playhouse. This is Adriana’s first time back on stage since her stroke in 2019.

Dawn Marie Zuniga-Williams has been active in San Diego theater for over 40 years. Coronado Playhouse roles include Lyn in The Great American Trailer Park Musical, various roles in Ruthless, and Tanya in Mamma Mia!

Jennie Gray Connard (Assistant Director/Choreographer) has been involved in theatre in San Diego for many years.  She has performed, directed, choreographed, produced and most recently was the Co-owner/Artistic Director of OB Playhouse & Theatre Company. Jennie is thrilled to be back at CPH to honor and celebrate its esteemed place in our theatre community.

Add a delicious cheese and fruit pairing for only $20.

Add a cheese and fruit plate AND a bottle of champagne or wine for only $45.

Perfect for two to three people! White wine, red wine or champagne is available. Ask about our current selection at our fully-stocked snack bar.

Order online once you select your seats.

Commemorative tote bags are also for sale at the cabaret!